There’s a cool new feature that I stumbled across today in Outlook 2010. I was writing a reply to an E-mail in a Microsoft Internal Discussion List. One of the people on the To line has an out of office setup so this appeared at the top: 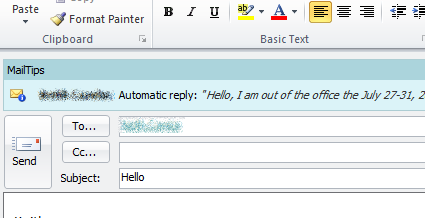 That’s pretty cool. Rather than send the E-mail, wait for the auto-reply to come in, Outlook 2010 will just let me know right up front that this person is out of the office! I know there are a lot of other great features in the new version of Office, but it’s the little details like this that will make it a killer upgrade.

In other news, I have recently pushed live a new version of the Office 2007 Real Life Tools web site. There’s 9 demo videos showing real life ways of using Office 2007 at home or in a home office. Find the version of the site for you here

I have four more locales coming in August. So check out Office 2007 for now, but do Office 2010 when it’s released sometime next year.

←Expression Blend 3 SketchFlow is for Prototypes

→You Cannot MouseLeftButtonDown if you have no Mouse