This year marks the 4th year that I have gone to the Microsoft //build/ conference. I had to miss last year due to some mix-up at work, but that’s in the past.

Every year seems to try and outdo the previous year and this was no different. This year some announcements were made that blew many people away. I was not one of them. I did find many of the sessions were very useful and made the whole conference great.

What’s with iOS and Android?

Ah, cutting straight to the heart of the matter. Microsoft announced a couple of projects that were aimed directly at developers of other platforms. The announcement is that Microsoft has crafted a couple of cross compilers that, with minimal code changes, would allow a developer to compile their Objective-C code (for iOS developers) or their Java/C++ Android code into fully functioning Windows 10 binaries. There seems to be some caveats, as one might expect, but the immediate response of course seems to be, “Who needs Windows developers anymore?”

Who does need Windows Developers

Well, frankly, I hope a lot of people decide that they need Windows developers. Sure now you can just ask your iOS or Android developers to pull double duty and compile their code for Windows as well as the primary platform. Heck, a clever release engineer could automate the whole thing. It just came across to me as a big slap in the face from Microsoft. Am I even needed anymore?

What about the fun stuff 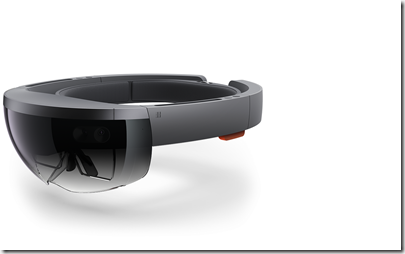 Okay, let me switch gears a little and talk about Windows Holographic and the HoloLens. In a stroke of luck, I managed to wiggle my way into the demo of HoloLens. This is the head mounted visor thingy from Microsoft. These things were kept pretty secure and out of the way. They were in a hotel next to the convention and you had to be invited to go see them. Before I got to put my hands on it I had to lock away all my belongings like my cell phone. Then they measured the distance between my pupils (66 mm in case you were wondering) and then they led me into another hotel room. To get to the room I had to squeeze past quite a few security guards. This was serious business.

Finally I got into the room where they placed the HoloLens on my head and ratcheted it down to fit snug. Then they booted up the device and I got to see my first glimpse into the future. The future my friends has a very narrow field of view, but I had to remind myself that even video on the Internet was once postage stamp size and look at it now!

The demo consisted of looking at a construction site as though I was the architect. I’m going to spare you all the details of the 30 minute demo. If you really want to know contact me on Twitter and I’ll spill it. In the end I was impressed and it was cool, but honestly it has a long way to go before it is as impressive as the example footage we saw in January would lead us to believe. “Meh,” I said and I meant it. Even though everyone else was jaw dropped.

I went to 12 of a possible 13 sessions. I skipped Friday morning because I rode to the City with my wife. Because my work paid for the conference I thought it best to attend sessions that will help me with my work. This meant that I missed out on the great maker kit that was handed out at the Raspberry Pi 2 talk. Epic sadness there. I will watch the talk online though and get my RPi2 running Windows 10 very presently.

Four of the sessions I attended had to do with design. I am not a designer by nature, but this is where my company seems most interested at the moment. Specifically, we have a Windows 8.1 app now what do we have to do to get it ready for Windows 10? The answer to this is a little complicated, but since nobody even mentioned the old swipe AppBars it is clear that we need to put the navigation on the screen somehow. Many of the apps I saw used the Hamburger menu system that is popular on mobile phone apps. Other apps just had their controls right on the app window. It is clear then that hiding the app controls is not the way to do things. I suppose this is another place where Microsoft was listening to the consumers complaints about Windows 8.1.

In a talk on Navigation and Windowing in Universal Windows Apps, the speaker introduced us to multiple windows single application. Although this technique has been used in the past it hasn’t, until now, been used in Metro either on the phone or on Windows. This is interesting because it means that we could have the viewer open in one window and our library still present with navigation controls in another window.

I went to a TypeScript and several JavaScript talks and the number one thing I got from them was that Microsoft is committed to standards based JavaScript and all the recommendations were around using ECMAScript 6 (A.K.A. ES6 and ES2015). This is handy since that is what we are using at work now. When asked how to handle down-level browsers the speaker recommended transpilation tools such as TypeScript or Babel. Babel is what we are use at work.

It was interesting when the speaker at one of the sessions asked if anyone was currently using ES6 only a few hands went up. Listen to me, you may just be reading this blog and not paying attention, ES6 is good stuff. I recommend looking it up and taking a tour. Here’s a good resource to get you started.

Why all the focus on ES6? Two reasons really: First Microsoft has a new browser out called Microsoft Edge. This browser is built on standards compliant JavaScript, HTML and CSS. It is fast and the way of the future for Internet browsing. Second, this Edge browser is the rendering engine that is used in apps built with JavaScript and HTML. ES6 will allow you to get the best possible performance out of both the web browser Edge and your HTML/JavaScript Windows 10 apps.

This is just the beginning of what is in store for Windows 10 development. My trusty Surface Pro 3 and I will be taking a wild tour of application development. I hope to document it as best as I can and I hope you follow along. Build 2015 was a fairly emotional ride for me and I am glad I went. Windows 10 will be released soon-ish and I hope that everyone that went to //build/ will tell all of their developer friends how to make the best apps they can. Microsoft’s goal of a billion devices starts with one killer app. That app is different for everyone so I hope that you get out there and build apps.